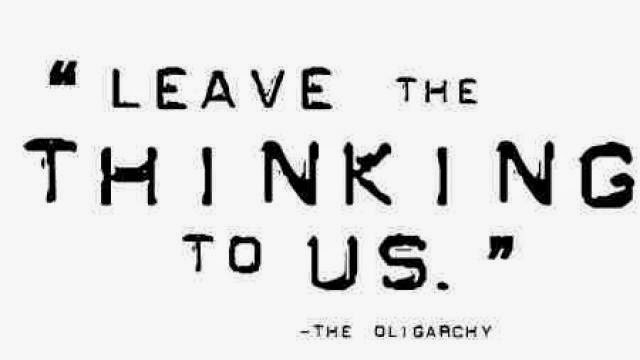 MoneyWeek publisher Bill Bonner introduces the concept of "poligarchs".  He explains it in The Daily Reckoning (20/5/14) and how American democracy relates to markets:

"Government’s primary concern is not to protect its citizens or their economy. Instead, it aims to transfer more power, status, and wealth to the elite who control it (the oligarchs). And to do that, it must keep the masses (the poligarchs) sedated. Charles Hugh Smith explains it:

“The State has two core mandates: enforce quasi-monopolies and cartels for private capital, and satisfy enough of the citizenry's demands for more benefits to maintain social stability.

“If the State fails to satisfy enough of the citizenry's demands, it risks social instability.”"

In my view direct democracy breaks this deceitful relationship. It takes power from the elite and gives it to the masses, who can vote on anything (e.g. the Swiss just voted against spending billions on the Gripen jet fighter and on a new minimum wage - BusinessWeek).

But why would the masses demand more power when they are satisfied with life?

They wouldn't. But I'm sure that large portions of them want their say on matters they feel strongly about. Matters that are often ethical rather than economic. This creates a political opportunity for a direct democracy party to change the status quo and create a more prosperous and equitable democracy.
Share |
Posted by About Interactive Democracy at Tuesday, May 20, 2014 2 comments Links to this post