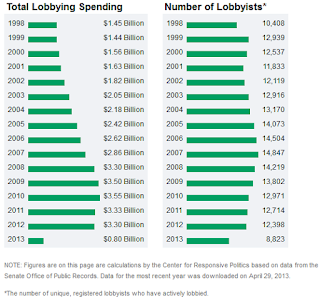 "... the 'K Street Index', after the street that American lobbying firms tend to call home. In the period measured, they spent $1.2trn on lobbying (including campaign contributions).
"Readers will note that lobbying is not productive behaviour, at least not in the ordinary sense. It does not lead to higher output. It does not fund innovation or new inventions. It does not pay workers, nor stimulate additional sales."

Contrary to what Bill says, perhaps lobbyists would argue that their activities open up new markets, rid markets of oppressive and dysfunctional legislation or promote political innovation. I don't know. Neither do I know over what period the $1.2trn was spent. But it's a vast sum that shows the power of money in the US politics. Power that subverts the egalitarian ethos of democracy.
Interactive Democracy redresses the balance, facilitating everyone to vote on almost every motion or bill. If you don't vote, your vote is devolved to your Member of Parliament. And you can propose and debate issues, too. All at minimal cost when run on the Internet.
Share |
Posted by About Interactive Democracy at Sunday, May 19, 2013 1 comments Links to this post

The Key to Growth? Race with the Machines

Could Interactive Democracy be a super team that solves societies problems?

"The new machine age can be dated to a day 15 years ago when Gary Kasparov, the world chess champion, played Deep Blue, a supercomputer. The machine won that day, and today, a chess program running on a cell phone can beat a human grandmaster. It got so bad that, when he was asked what strategy he would use against a computer, Jan Donner, the Dutch grandmaster, replied, "I'd bring a hammer."
But today a computer is no longer the world chess champion. Neither is a human, because Kasparov organized a freestyle tournament where teams of humans and computers could work together, and the winning team had no grandmaster, and it had no supercomputer. What they had was better teamwork, and they showed that a team of humans and computers, working together, could beat any computer or any human working alone."

I suspect that internet technology facilitating a vast web of human experience could outperform any political expert or supercomputer. "Technology is not destiny. We shape our destiny." 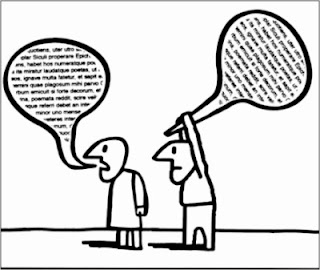 UKIP candidate Alex Wood claims character assassination by hackers of his FaceBook page. He was subsequently suspended from the party. He has reported the incident to the police and still intends to stand in the imminent council elections. (More here from the BBC.)
Worshipping or vilifying people has long been part of British politics and democracy but it does little to illuminate the issues and policies. Perhaps it's built into our base instincts but Interactive Democracy provides an opportunity to limit its corrosive effects by concentrating on issues, offering people the opportunity to write counter arguments and counter proposals and deploying sanctions against those that abuse others or present lies as evidence supporting their view. This can be achieved on the ID web site because individual voters are identified through the electoral roll yet can remain anonymous to other users. ID would also employ more stringent defences than FaceBook, based on those developed for Internet banking.
It is my view that sanctions against lies in public life would be a clarifying system for any form of democracy and I propose a format similar to the Advertising Standards Authority, where complaints trigger an investigation.
Share |
Posted by About Interactive Democracy at Wednesday, May 01, 2013 0 comments Links to this post