Public administration is often performed by public servants who have never been elected. They may be foreign diplomats or city managers and they work in the name of the public at every level from local to national. This public administration degree site gives a more complete explanation of the roles and professions these bureaucrats perform in government. Recently, the BBC's Panorama programme looked at the pay of top public servants, many of whom earn more than the Prime Minister. I wonder if Interactive Democracy would enable votes 'for' or 'against' top notch pay packages and if the ensuing debate would clarify the benefits that senior employees bring?
Share |
Posted by About Interactive Democracy at Tuesday, September 21, 2010 0 comments Links to this post

This entertaining lecture, by Harvard psychologist Dan Gilbert, highlights some ways in which we make daft decisions.

"I'll pay less, thanks for asking." 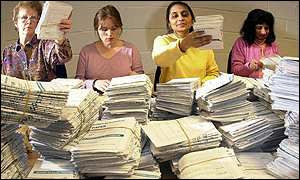 This article, published by the BBC in 2002, reviews the results of Council Tax referendums. Not everyone wanted to pay less tax: in 1999 Milton Keynes voted to increase tax but other majorities chose the least expensive option. In subsequent years the idea of asking voters has been abandoned possibly due to the low turnouts and high admin costs. Croydon Council spent £150k on a referendum on two issues but to put that in perspective it costs about £60 million a year to run the House of Lords.
If Interactive Democracy were in place, utilising secure web sites, the cost of each referendum would be very small indeed. I wonder if ease of access would also boost voter involvement.
Share |
Posted by About Interactive Democracy at Monday, September 13, 2010 0 comments Links to this post

The Government asked for ideas on cutting public sector spending, in order to reduce the deficit, and then asked you to vote on them. According to their site 45000 ideas were submitted and 250000 votes cast. Unfortunately the process has now closed. Why can't this be an ongoing system? It could easily be part of the ID web site.
Share |
Posted by About Interactive Democracy at Friday, September 10, 2010 0 comments Links to this post 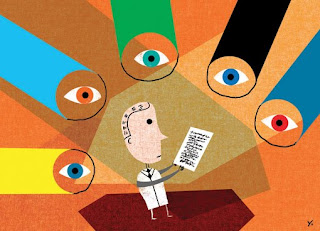 The scientific process - observation, hypothesis, experimentation and new hypothesis - isn't the end of the matter. Peer review involves a whole raft of knowledgeable and motivated people in considering the truth of scientific papers. In the initial stages of this review process are editors who send papers out to their selected reviewers before they commit to publishing.
Could this process become part of democracy?
Central to the notion is that editors are able to choose experts who have a greater say over the progress of ideas than anyone else. It is entirely feasible that a cross party committee of MPs could assess the qualifications of people who put themselves forwards for this role, based on academic qualifications or direct experience. These reviewers (who are unlikely to be politicians) could be given the privilege of being able to express themselves on "Experts" pages attached to each issue on the ID website, which voters could then read and judge. This would ensure expert leadership were brought to the fore without undermining the power of voters. It would also form another counterbalance to the power of the press.
Share |
Posted by About Interactive Democracy at Friday, September 10, 2010 0 comments Links to this post

In this TED Talk, David McCandless presents some ideas on data visualisation and shows how it can lend perspective to the raw numbers, present vast complexity in a simple form and illuminate patterns. It could be an asset to democratic debate.
As part of his lecture he also presents a diagram of the left and right in politics, maintaining a balanced approach.