Students who were shown fleeting glimpses of candidates and were asked to judge which looked the most competent were shown to correlate with election results 2/3rds of the time, according to studies by Toderov et al (2005) and Benjamin & Shapiro (2007). This was presented in "Nudge" as evidence that voters make automatic and instinctive decisions about politicians and, generally speaking, don't reflect or deliberate much. I suggest that those instinctive reactions have evolved to be particularly important in judging people, their moods, likely behaviours or social connection. It's an animal response.
Interactive Democracy asks people to judge policies separately from candidates. I hope it would have some success at encouraging people to be reflective rather than reflexive.
Share |
Posted by About Interactive Democracy at Friday, November 23, 2012 0 comments Links to this post

The End of Politics and the Birth of iDemocracy 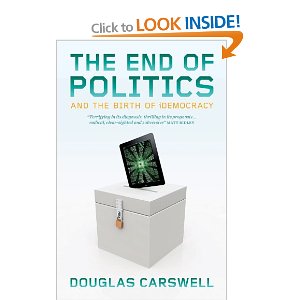 MP Douglas Carswell's book "The End of Politics and the Birth of iDemocracy" highlights the problem of how to pay for the welfare state "on the back of a diminishing wealth-creating base" as one of the forces that will promote iDemocracy.
Share |
Posted by About Interactive Democracy at Friday, November 02, 2012 0 comments Links to this post