Democracy and the Fall of the West 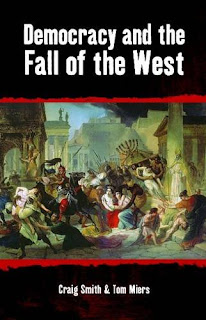 Is democracy as doomed as the Dodo? asks Money Week on reviewing Craig Smith's and Tom Miers' "Democracy and the Fall of the West". Their basic point is "Democracy is no guarantor of liberty because voters often want to take away the liberties of others and will vote accordingly." It's not that they think that the West will crash dramatically but they forecast a "prolonged sunset". This idea runs contrary to Niall Ferguson's idea that the Property Owning Democracy was an essential "killer app." in the rise of the West.
It is clear that there has been no tyranny of the majority in Switzerland, where voters have far more power and responsibility than in other Western Democracies. And the Swiss enjoy one of the highest standards of living of any western country, with a cohesive and supportive society. So I suggest that it isn't Democracy per se that is at fault, but our version of it, corrupted from the ideal of personal responsibility and Citizenship by our disconnectedness from political power and the irresponsibility of spinning, vote hungry politicians.
Smith and Miers suggest that the problem of our expanding welfare system can be dealt with by distributing cash equally to all citizens to spend on welfare services from government or private providers. An interesting idea, though they despair of it ever happening. But it could be an Initiative in Interactive Democracy. However, ID goes further, it distributes political power more equally between citizens (analogous to distributing money in their example) and taps into their creative potential. It encourages innovation, responsibility, learning, adaptability and evolution.
Share |
Posted by About Interactive Democracy at Wednesday, July 13, 2011

Email ThisBlogThis!Share to TwitterShare to FacebookShare to Pinterest
Labels: "Democracy and the Fall of the West, democracy, Miers, Niall Ferguson, Smith, switzerland