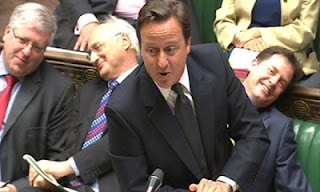 I don't doubt that our MPs are reasonably intelligent and accomplished people, so when I watch Prime Minister's Questions why do I see such poor behaviour?
Why is it that the opposition so often seem to talk in empty sound bites, the only purpose seeming to be to "dis" the incumbent government?
The Independent report on it in their article "Oh, Balls... when Cameron lost his temper - again."
Perhaps it isn't the quality of the people involved, but the rules of the political game that create this political culture, full of hubris, demagoguery, sound bites and spin. In "Direct Democracy in Switzerland", Fossedal writes of a different political culture where free and fair debate is underpinned by decency and respect. Interactive Democracy should be designed to foster such behaviour.
How? It focuses on issues not personalities. It seeks evidence, not unsupported opinion. It fosters truth by punishing lying. It is open and transparent; rational and egalitarian. Points made by MPs are written on-line, permanently recorded and easily searchable, forcing them to be considered rather than flippant, and allowing us to judge them. It provides rapid feedback loops that can correct bad behaviours quickly rather than allowing them to fester into new norms.
Share |
Posted by About Interactive Democracy at Thursday, May 24, 2012

We have some politicians that invoke tantrums and name calling that would make kids look more mature in question time here in Australia.

ID takes the time wasting name calling out of the picture and puts the focus on the issues at hand.