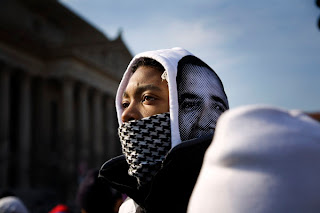 Britain and American crime rates have been falling for decades, according to MoneyWeek, reaching 30 and 40 year lows, respectively. But why? The magazine notes that the trend runs contrary to the common wisdom that they are correlated to the economy and posits several alternative theories, including this: "Some commentators have argued that poor black and Latino males (the section of society most likely to see themselves as alienated, powerless outsiders, and who commit a disproportionate number of crimes) feel more connected to America because it has a non-white president for the first time...".
I don't believe that statement to encompass the whole truth, but does a feeling of belonging, of citizenship, reduce crime? Low crime rates in Switzerland, which operates direct democracy, may suggest so.
Share |
Posted by About Interactive Democracy at Friday, June 24, 2011