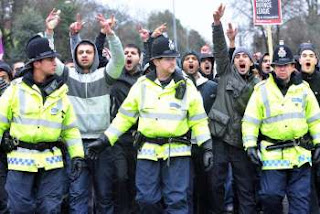 One concern about giving citizens more direct power in a democracy may be a worry about mob mentality. Since the aristocrat LeBon wrote 'The Crowd: A Study of the Popular Mind' in 1896 there have been theories from many academics including Jung and Freud. Although many different types of crowd have been identified there are three broad theories of crowd behaviour:
So, how does Interactive Democracy discourage mob mentality?
Firstly, when people are given a meaningful route to contribute to democracy there may be far fewer protest marches, maybe even fewer strikes. But what of the development of other groups, perhaps coming together on the Internet?
In the ID system people are not anonymous, they can always be held to account, thus dissuading errant behaviour. (The Internet itself may provide a parallel and anonymous forum, depending how privacy laws develop there.) The ID system allows alternative views to be linked to any one's Initiative, proposal or comment, encouraging a balanced debate and discouraging group think. Abusive language, lies and misinformation can result in charges or a ban from the system, encouraging people to take care in what they write and reducing the emotionality of debates. This is policed by other users, who can complain to the authorities, and by automated systems that can prevent certain words. The rules of behaviour on the ID system are set by MPs: they establish the norms. Finally, the ID system is about debate and decisions not the violent action that is associated with mobs.
Share |
Posted by About Interactive Democracy at Thursday, June 16, 2011